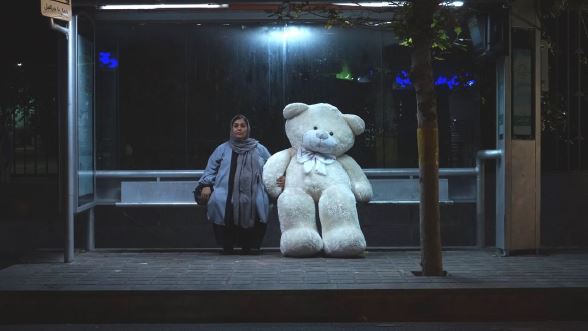 Born in Tehran, Iran in 1981, Ali moved to Vancouver, Canada in his teens. In 2008, after spending a year attending Abbas Kiarostami’s filmmaking workshop back in Tehran, he
decided to follow his real passion for making films by studying at the London Film School.

Tehran: City of Love is a love story telling the tale of three individuals desperately seeking
companionship in the Iranian capital. We caught up with director Ali Jaberansari.

How did the film come about?

As an Iranian living outside of Iran for more than twenty years, I’ve always felt like an outsider wherever I’ve been, including my home country. Iran is a country full of absurdities and for me it always felt ripe for the deadpan absurdist humour that I particularly like in cinema. It took me a while to understand that I could salvage this ‘outsider’ feeling and use it to look at things slightly differently. I believe humour can sometimes be the best way of communicating deep and intense feelings, but it also requires some distance to the subject. Being an outsider allowed me the distance I
needed to add that tinge of humour, while at the same time being close to my roots in Iran. The film came out of this desire.

What genre would you describe the film as? It’s got elements of the romantic comedy in it but it’s certainly not conventional in that regard.
It’s been called bittersweet comedy by some people. I tend to agree with that.

To what extent do you feel this is a political film?

The city and setting are key to many of the themes. Unfortunately in a country like Iran, the most basic and mundane act can be political. This is because the politics have entered the private sphere of life. Having an ice cream, going to a stadium or a concert, or simply sipping tea at a cafe can become political acts. Of course, in such an environment any creative act is by nature political. But I can’t say that was our intention. Having
said that, in such an environment, the act of loving (especially when it’s forbidden due to tradition, sexuality or religion) can certainly be political. One of the criticisms of the film, from the script until the end, has been that these stories can happen anywhere else in the world and they are not ‘Iranian’ enough (a very post-colonial and orientalist view in my opinion). I disagree with that and agree that the city and setting is key to all three stories as you have suggested.

The final sequence and shot really leave a lasting, bittersweet memory. To what extent do you feel the meaning of the film is captured in those moments?
That is wonderful to hear that the final image has left that impression. Of course, the final image is what we as creators want to leave the audience with and I believe it’s one of the most important parts of the film. So I’m glad to hear it has worked 🙂

Casting was key to the films success with three key roles carrying the narrative. How did you choose the actors?
I’d say casting was one of the most difficult parts of the process. I was very lucky with the choices. They all came from different ways through different people on our team. Some of them I auditioned for weeks and some of them I just cast on the spot. I have to say that the two body builders are non-professional actors and it was their first time having a role in a film. Other actors are mostly less known theatre or cinema actors with the exception of Behnaz Jafari (Niloufar) who is more famous and well known.

What sort of distribution does the film have?
The film’s worldwide sales is with a French sales agency called Reel Suspects, who have sold it to some territories. And the UK distribution is New Wave Films. We are also planning to have limited distribution in Iran as well.

What are you working on next?
I’m debating whether to make a film in Iran or outside next. I need some time.

Tehran: City of Love is out now. Our thanks to Lizzie at Porterfrith for arranging the interview and Ali Jaberansari for his time.