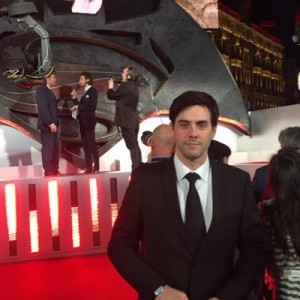 Shane Sweeney is an up-and-coming actor/film-maker with experience in feature film and theatre. In 2016 Shane makes his directorial debut with One Thing Left To Do, a film he also wrote and produced.

Shane has appeared in four feature films including Drunk on Love, Travellers and Till Sunset which was written and directed by fellow Outward comrade David Woods.

What actors inspired you to pursue acting?

I grew up being schooled by my mother on stars of the silver screen like James Cagney, Gene Kelly, Clark Gable and Kirk Douglas. In my teens, I found Leonardo DiCaprios range incredibly inspiring. His work in This Boys Life had a profound effect on me. Andy Garcia too. His eyes told the characters story and that really spoke to me. This might split the room, but Tom Cruise also. I believed every single word he said. And still do. Some actors I would watch sitting on a box for two hours and be enthralled the entire time.

What’s the best bit of (acting) advice you’ve been given?

I’m not sure if this qualifies as advice, but its an ethos I take on to my set. Be humble and kind. I don’t allow for any kind of diva outbursts, nor do I wish to be around something so toxic. I bear this in mind when I’m casting, or even writing. If I’m going to spend 20 hours a day, 6 days a week for 3 weeks with someone, I need to like that person.

Has your acting style changed in any way over time?

The only way my approach has changed over time is that I now spend longer discovering the mind of the character. When someone wants to be an actor, they do all they can to prepare lines, how to say a word, where the emphasis is on a certain syllable, etc. But over time you realise those things come naturally if you lay the foundation and discover the character. I spend a lot of time trying to make a person unique, the way he smiles, eats, talks, walks, carries himself, etc.

How affected are you by a films budget when choosing work?

In no way whatsoever, a film lives and breathes with the script, and then the execution of the script. A budget should never come in to it. As soon as you start considering budget, you sacrifice creativity.

Having appeared as a principle lead in four feature films on zero-micro budgets, how do you compare the experiences? What do you determine to be the advantages and disadvantages of working on budgets under 10K?

Zero-budget films have a great sense of community. Every single person on that set is there because of a passion. And with passion, you get a connection that can be absent on bigger sets. There’s no denying that wed all like our own trailer, that goes without saying. And its that sense of community that is so euphoric and addictive and, ultimately, makes an actor better I believe.

What should a director do to make their actors comfortable when working unpaid?

Actors need compliments and reassurance. Treat them like that, and you will get the best out of them.

Will you continue to get involved with zero budget film-making in the future or is there a shelf-life in your opinion?

How did you find directing on a shoestring in comparison to acting?

Its certainly the hardest thing I’ve ever done. There is no down time. You’re up all night thinking about shots, trying to be prepared for the next day. And when you’re on set, for the most part, you have your directors hat on. My main concern was that I would neglect the one for the other. Its difficult trying to get into character when you are directing other actors, looking at light, watching the playback and doing it all on a couple of hours sleep. And, as was the case with this film, in a different country, with a limited amount of days. Its a juggling act. I haven’t slept well for 3 years. Luckily I have a very patient wife.

Is celebrity important to you as an actor?

The trailer to Shane’s directorial debut can be found here.