My name is Lauren Hatchard and I am a freelance filmmaker based in Birmingham. I love the variety of work that I get as a freelancer; from camera assisting in Thailand, editing in Milan, making short films in Ireland and organising hundreds of extras on a Bollywood feature film, every week is different. My background in fine art and photography is what uncovered my passion for visual storytelling, my degree in ‘Advertising & Commercial Film Production’ taught me the craft of the production process and my film industry experience has taught me that I love collaborating with likeminded others.

1. What films inspired you to pursue a career in film?

When I was young I remember watching behind the scenes documentaries on both ‘The Wizard of Oz’ and ‘Star Wars’ and I just remember being fascinated by all the work that goes on behind the camera. I am a huge fan of Michel Gondry and have lost count of the amount of times I have watched ‘Eternal Sunshine of The Spotless Mind’. Gondry’s playful and innovative style of filmmaking has influenced my own short films and music videos. I love his use of in-camera trickery, it reminds me of when I was young and I used to make ‘magic videos’ with my sisters – making objects appear and disappear like magic!

2. What films/filmmakers inspire you today?

I have been very inspired by filmmaker and Birmingham’s Electric Cinema owner, Tom Lawes. He recently completed his feature film ‘Monochrome’ which I had the pleasure of working on. Tom approached ‘Monochrome’ as a complete auteur and had a handle over every element of the film, from writing the script through to composing the soundtrack. Not only does he have a real focused vision for what he is making but he also collaborates with a small crew of like-minded individuals who he can trust in and develop. The six weeks on Monochrome were like six weeks with a family, it was such a fun and creative atmosphere and everyone was driven by Tom’s passion and vision. It is this style of filmmaking that I love and is the reason I got into filmmaking.

3. Do you think there’s a healthy filmmaking scene within the region?

I have always been advised to move to London, but I have resisted. Whilst developing my career, Birmingham has been a fantastic base as I continue to grow my network of contacts in the area. I have been fortunate to work on four fairly big feature films over the past year, all intended for theatrical distribution, all being shot within Birmingham and Midlands locations including The Girl With All The Gifts. It’s great to be involved with films in which the story is actually set in Birmingham, much like Justin Edgar’s film ‘The Marker’ (in post-production). I think the Birmingham crew that I have had the pleasure of working with are all really hard working and personable people, a lot of whom I would now describe as good friends. I am proud to be one of the Brummie crew when a new film comes to the area. I can certainly see that there is an increase in films being shot in the region and I am excited to see what else comes our way.

4. You have been very successful in the camera department; do you have any desires to direct?

I have been fortunate with my experience in the camera department so far and I am very grateful to those who have believed in me and given me opportunities to learn and develop new skills along the way. I have also enjoyed directing short films, music videos, documentaries and most recently self-shooting as EPK Director (behind the scenes interviews etc.), but I would say I am most happy when I have a camera in my hands. There’s a lot of pressure on the shoulders of the director, but I think if I had a story I was really passionate about telling and a crew I really trusted then I can see this as something to aspire towards chasing in the future.

I want to be grabbed straight away, the first paragraph can completely set the tone and either hook you or lose you. Sometimes I sneakily read the last line too, just to see where we end up, but the main bulk of the story is the journey we follow to get to that last frame. It’s an interesting, believable and likeable character that will make you want to follow this journey with them. I like to read a script from an audience’s point of view and I like to imagine what we will be seeing on the cinema screen as I am reading it. I personally love scripts that transport the viewer to another realm, not necessarily fantasy but an imaginative concept that plays with the creative medium of film to tell its story. Also, it would be great to see more scripts that can pass the Bechtel test and are a bit less formulaic and predictable.


6. What does the term ‘zero budget filmmaking’ mean to you?

There is always a cost involved making films. My experience of zero budget filmmaking has still put me out of pocket; it just means that there isn’t any budget to pay a crew. However, it’s a great way of starting out and making films for your portfolio. I made a music video for under £100, managed to get a location for free, enlist the help of five experienced visual effects artists and also roped in some creative friends to make some costumes, props and to do make-up for a sci-fi. You have to think on your toes and utilise your contacts and connections to get what you want, guerrilla style. I have also taken part in various film competitions, that will involve getting people together over a weekend and you have to beg, borrow and steal everything you can in a short space of time. It makes you a great problem solver and fast decision maker under pressure, which are great skills for being on any set.

7. What aspects do you look for in a no pay project to compensate for the absence of a working wage?

I tend to shy away from no pay projects now, as sadly the bills wont pay themselves. However, at the start of my career I was looking to get as much work experience as possible in order to get my name out there and make new contacts. It certainly has to be beneficial in helping the old CV, but most importantly it has to be a pleasant experience. If there is no pay then the crew should be treated with upmost respect, that means reasonable and agreed working hours, no over running, offering travel expenses or lift share options and lots and lots of nice food. Having decent food on shoots can completely lift the spirits of the crew, look after your crew and they will come back again tomorrow.

I did a really good degree course and was able to hone the craft of guerrilla filmmaking as well as the professional production process. As a student you have to work with the resources you have to hand and hustle your way into negotiating what you want with locations etc. Also as a student, the chances are that you wont have any budget and all the crew are fellow students wanting to get experience, so it’s similar to zero budget filmmaking. However, for those who can’t afford film school or if higher education hasn’t worked out for them, I think that the best way to learn about making films, is to get out there and make them! 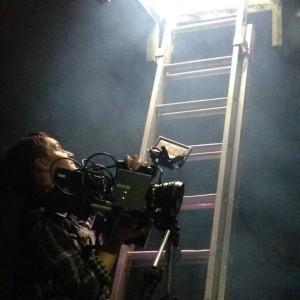 9. What advice would you give to someone starting out in filmmaking?

I could go on for quite a while here but I will try and keep it brief. Get some kit, gather a crew and go and shoot! If you’re still at school or college you could join us at ACT2CAM – the film production company for young people that offers summer residential film camps for hands on filmmaking experience www.act2cam.com. Enter a film challenge with some friends and shoot a short film. I can strongly recommend the Offline Film Festival in Ireland www.offlinefilmfestival.com – you can have your script prepared and rehearsed in advance, but within 60 hours you are given kit and have to shoot and edit and hand in your short film and see it screened at the end of the weekend on the big screen to be judged for prizes. It’s all too easy to sit on ideas, but by entering a timed challenge it forces you to make a film and whether it’s a masterpiece or not, you will have learned so much. Also making mistakes is ok. Make your mistakes and learn from them. Test out equipment and also test out your ideas by pitching them to people. But also learn from others, ask to shadow professionals or do some work experience, or perhaps get on a trainee scheme – it’s an industry of creative collaboration and working with people.

Will you sign my petition to get more first time writers into Government linked broadcasters like the BBC and Channel 4? Let’s make it happen!

I’d like to add a few remarks if I may. What this petition is about is raising awareness and starting a conversation. It may be that the BBC and C4 argue this down to 25% or “professionally debuting” becomes “no more than x number of credits.” https://t.co/RsYZ4PJc0i

Note: some 'film festivals' are actually just a team of sales reps. Desperate for your 💲💲

Success at these types of festival should be questioned.