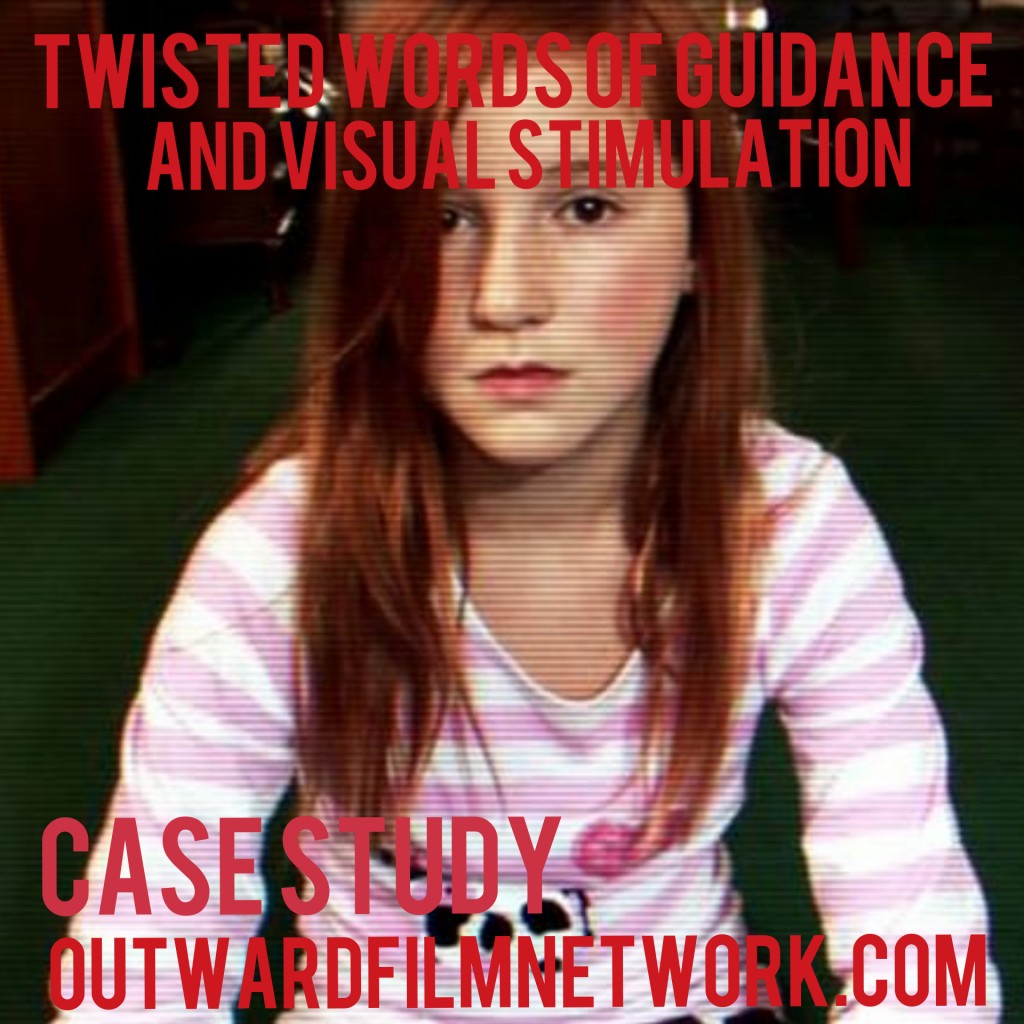 In a new series, Outward film network takes a look back at some of the previous shorts the Outward team have been involved in examining what went right, what went wrong, what challenges were faced, how the films were received and how they were made on a zero budget.

What, who, where and when?

Twisted Words of Guidance and Visual Stimulation is a three minute short that was made in September 2010. Written and directed by Matthew Simmonds and produced by Phil Slatter, the crew also consisted of David Woods as director of photography, Beckie Welfare on make-up and Dan Pugsley on sound recording and design. It was edited by David Holloway. Although made prior to Outward being set-up, it marks the first short Matthew Simmonds, Phil Slatter and David Woods all worked on together.

Set entirely in a living room, the plot involves a mother (played by Gemma Woods) and her daughter Sally (played by Esme Allen-Quarmby) bickering over the T.V. schedule. In a satire on modern life and the effect of multiple T.V. channels available, it examines how the pairs relationship is dictated by the T.V. schedule and leads to them bickering.

Filming took place in a family home in High Wycombe.

What challenges did it present?

The T.V. which plays such a key role needed to be largely off screen as otherwise the action wouldn’t have matched the narrative of what the characters were discussing. With no budget, creating the T.V. action and playing it back through the film was not possible.

We also had to cast a child actor who would play a key role.

We got in touch with Dan Pugsley who was able to record voiceover (with various members of the crew filling in different roles) that we could play in the background and give the presence of the television filling the room.

To cast the role of Sally, we located Esme’s mum Heather who was a great supporter of the project.

What problems did you encounter?

Being set indoors with just two actors and a small crew meant the shoot itself was almost entirely trouble free.

We had problems finding a director of photography and even had one that agreed to fill the role only for him to tell us that he didn’t think it could be done on a micro-budget. David Woods stepped in and although he is not a trained DP, the lighting kit and natural light were used to create the ideal effect.

In post-production, we had an editor ready but after hanging on to the tapes for a while he returned them saying he couldn’t find the time to do the edit. This mean post-production was dragged out somewhat and we had to find a new editor.

How was it made on a low budget?

We filmed at a family home so the location was free. The cast and crew worked for free and without expenses as they believed in the project and wanted to build up contacts and credits. The actors wore their own clothes and the camera was one on loan to David Woods for filming of his feature Till Sunset.

The money we did spend was around £150 and was provided by Matthew Simmonds and Phil Slatter. Money was spent on make-up, tapes and lunch for the cast and crew.

How did the film turn out?

The final film turned out well and everyone was pleased with the results. It was selected for Shetland Arts Hansel of Film and the Sundance ‘Story of our time’ competition where it was screened on their website in 2012. It was also screened at a showcase at The Albany in London in February 2013.

What did you learn from the film?

Pre-dominantly the importance of having a post-production plan in place. Post-production dragged out too long due to the issues encountered with the editor. When this happens, enthusiasm for the project can wain somewhat. Fortunately the editor we did find did a terrific job as did all the cast and crew.