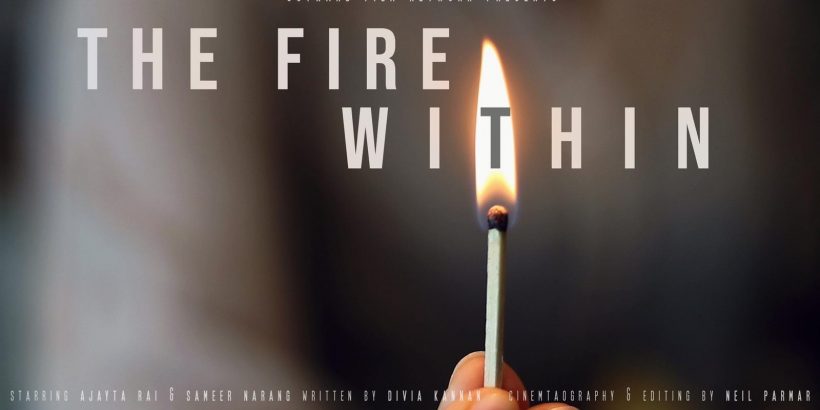 Opening with a seemingly trivial conversation between Priya (Ajayta Rai) and her mother, Neil Parmar’s short film The Fire Within goes on to tell a dark tale of a relationship on the brink. We spoke to Neil and the film’s writer Divia Kannan about the production.

How did the film come about from conception to shooting?

NP: I initially had the idea of making a film that had a straightforward idea but included dialogue in Gujurati, which is my home language. This idea behind this was to have a story that was not all that uncommon but highlighted key issues that happen in British-Indian families but are not always highlighted. I asked Divia to write a script for this idea, and she developed a narrative and backstory for the characters.

DK: Neil initially came to me with an idea for a short film, and after hearing the concept, my first thought was, that this would be a brilliant story to tell. Especially with a female lead. Writing the screenplay was a process in itself. I wanted to do the story justice as so many Women face these issues, especially in British Indian families today, marriages are still arranged to some extent and couples do feel that pressure, it’s a very raw subject and has so much truth to it. There were many edits along the way until both Neil and myself were happy with the scenes.

Did the fact that the lead actress have to be bi-lingual present any casting difficulties?

NP: It caused a great deal of casting difficulty, yes. Gujurati is not a widely spoken language in the UK, at least in comparison to Punjabi, Urdu or Hindi. So much so that we ended up changing the ‘non-English’ dialogue to Hindi. Eventually we managed to find the talent that is Ajayta Rai, who did an excellent job on the film acting in both English and Hindi.

DK: I think we were very lucky that we managed to get a brilliant cast. Changing the language from Gujarati to Hindi was a great call from Neil. Ajayta did a fantastic job with the character both in English and Hindi. She really delved deep into the characters story.

What challenges did you encounter during filming?

NP:I can’t believe I’m saying this, but TFW was a fairly non-problematic shoot. We were lucky in the fact that I had the main location at my disposal and I have found that finding and securing locations with zero-budget is often quite trying. Credit is due towards the actors also for being very invested in the script, which saved a lot of time and additional effort during the shoot.

How long was the shoot?

NP: The bulk of the film which takes place at the house was nailed in a couple of hours. After the first edit, Divia  and I felt like the film could benefit by having an extra scene that was shot at an exterior location to develop the narrative further. This was executed quite quickly as well, probably within an hour. I could blow my own trumpet here and say it was down to good planning but once again, it was also down to excellent preparation from the actors. The cast and crew worked well together and there was a good level of mutual respect, plus everyone wanted to do a good job. From past experiences, a clash of ideas or even egos have caused shoots to be delayed.

DK: After speaking with Neil, he mentioned that the shoot went very smoothly. There was an extra scene added after both Neil and myself went through the first edit. But the cast and crew were so amazing, they pulled everything together and got the extra scenes shot as well.

How big was the crew?

NP: Very small – myself, 2 actors and a OFN’s Matt (Simmonds) as a production assistant and producer. I’m a fan of using skeleton crews and will continue to do so for future projects.

What was the budget, and where did most of it go?

NP: Very minimal. Only money spent was props. I’d tell you what they are but they’ll probably give the plot away. I want to promote the fact films can be made on a minimal budget, along with a bit of improvisation and networking.

How satisfied are you with the finished article?

NP: Anybody who knows me well, will know that I am a very self-critical about my own work. However, I am happy with The Fire Within. As a director would, every time I watch it, I can see things that I wish I did different, in particular some shots. But for the most part I am happy with it. I think that boils down to having a solid idea, adequate planning and an excellent cast and crew

DK: As a writer you do worry if the story is going to be told how you imagined it when writing, but I have to say I was so happy with the end product. Neil trusted me and gave me the freedom to play around with the story until I was happy with it. I was also lucky enough to be given the chance to be part of the whole process and provide my input during the edits, title and the poster for the film. The cast and crew did an amazing job and as Neil mentioned, everyone wanted to do the film justice and we all worked collaboratively. There are always things you would like changed after watching scenes over again but I’m so excited about the final outcome. I hope this film helps anyone watching, as we all have fires within us and yes we need courage and strength but you’re not alone and there is always a choice but we have to be strong enough to make it.