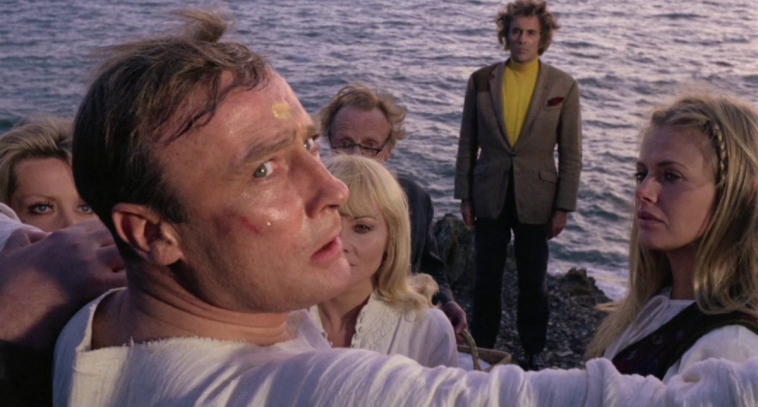 Richard Wells is a graphic designer based in the West Midlands. His unique artwork has appeared across various mediums including TV and film. Notable appearances include Doctor Who, Sherlock and Bill!

Richard’s influences can be seen across his artwork, his love of horror and David Lynch has led to some pretty spectacular designs (check them out here!) and has gained many plaudits online. It’s great to have Richard choose his Desert Island Flicks!

My mom would tell you it’s Dumbo (apparently I used to insist on watching the VHS daily), but you’re not having that as my answer. It’s probably The Wicker Man. I’ve fallen into a routine of watching it annually, when summer is icumen in. I love the playful menace of it, the villager’s gleeful hoodwinking of poor Howie. Everyone wearing figurative and literal masks. It’s a wonky kind of masterpiece, my ideal film.

How about David Cronenberg’s Videodrome. I love his chilly concrete grey 70s films, but for whatever reason I’ve never seen this one. Thinking about it now, I’m more inclined to revisit The Brood, with Ollie Reed and the horrible rage children in their matching snowsuits.

The Exorcist! Not really… Probably anything by Jacques Tati. I only got onto his work a few years back, around the time I saw Sylvain Chomet’s incredible The Illusionist, based on one of his unproduced screenplays. They’re all solid gold and full of joy, but Playtime (1967) for me is the clear standout. An astonishing achievement, the vast scale of it like a Where’s Wally of impeccably timed sight gags. For an additional lift, I recommend the Tati film soundtrack compilation (on regular rotation in my car).

I’ve been thinking about my favourite films of the year, and I remember everyone raving about Lee Chang-dong’s Burning. I went in having not read any reviews, and left resolutely unthrilled. I never found the unfolding mystery particularly intriguing, and was fairly bored for a large chunk of it. That said, I’m keen to re-visit, maybe I had an off day at the cinema.

I feel like if I ever made a film, it would look and sound like a film by Peter Strickland. So now I don’t have to bother! While The Duke of Burgundy is my favourite, Berberian Sound Studio probably ticks most of my boxes. The tobacco-stained 70s period and nerdy eye for techie analogue detail, the behind the scenes film production woes and spiralling madness, set to the sounds of an Italian horror film. And Toby Jones!

When I left school, I did an art college foundation course. As part of the film module, our lecturer screened a double-bill of David Lynch’s Eraserhead and Lost Highway. Both had a huge impact, not least in terrifying me to the core. Cinema that discards convention, makes its own rules, by turns hilarious and horrific. The two films pretty much shaped my viewing habits for life, forever drawn to the absurd and nightmarish!

I’m fairly obsessed with Juraj Herz’s film The Cremator (1967). Perhaps it’s a bleak choice to take to a desert island, concerning the corrupting nature of power on an eccentric crematorium worker in Nazi-occupied Prague. I find the filmmaking technique thrilling, it’s an editing masterclass. Plus the mesmerising central performance by Rudolf Hrusínský nails the blackly comic tone of the piece. One of the many gems to be found in the Czech New Wave movement.

Stuck on the island, I’d certainly miss Hammer Horror. I’ll take one of the less obvious films, Demons of the Mind (1972). A fabulously unhinged Gothic melodrama, with a top drawer cast including Robert Hardy, Patrick Magee, and the great Michael Hordern. A hoot!

I’m usually pretty good at avoiding terrible films. A while back I went to one of those Odeon Screen Unseen things, where you don’t know which upcoming film you’re seeing til it begins. I got Blair Witch (2016). As a huge fan of the 1999 film, it was infuriating to see a film so widely miss the mark, the filmmakers apparently failing to recognise any of the elements that made the original such a success. A miserable experience. Bin it.